Sugar is an issue – a big question at the moment. People have been muttering about how refined sugar isn’t very good for you for years, though they do it in a hush-hush, roundabout way that’s never clearly spoken about. The fact is it contains no nutritional benefits and in some ways it’s actually harmful for your body. 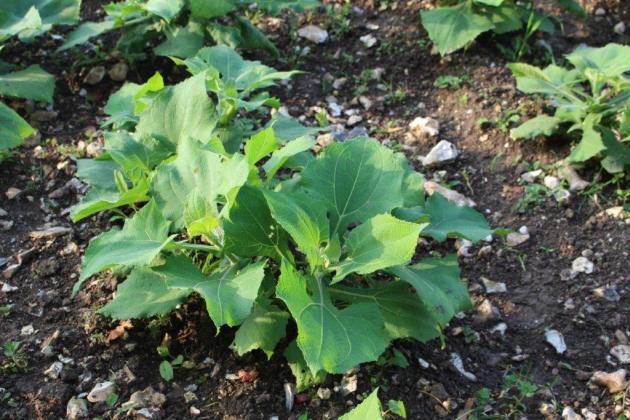 The yacon plant originates from the Andean highlands and is grown in Peru, Bolivia, Ecuador, Argentina and Brazil. It’s actually a member of the sunflower family and has huge tubules or fleshy rhizomes underground, a bit like a root vegetable. What’s so great about this little plant is that 40-70% of the root dry matter consists of oligofructose (OF), a particular sugar with several health benefits. And, what’s even better is that Mr Mole, owner of Lower Pertwood Farm, is growing yacon in the soils of Wiltshire as a trial, at this very moment.

Mr Mole’s tasted yacon and he’s pretty excited about trying to grow the plant in the UK. “Yacon syrup has a sweet, malty taste that’s wonderful,” he says. “And what’s so great about it is that it’s not absorbed into the bloodstream – it truly is a healthy food. The problem with any food is taste – people would much rather be unhealthy than not enjoy it, and so most people chuck sugar on their cereal and mix teaspoonfuls into their tea. But wouldn’t it be nice if you could take a mouthful of cereal and think ‘wasn’t that delicious’ and you didn’t have to add anything to it?” 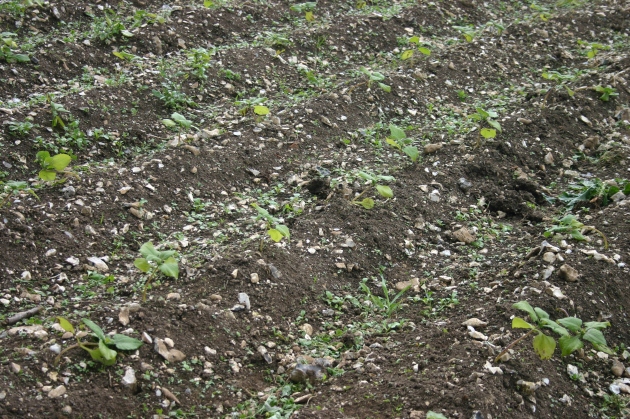 I can’t help agreeing that it would be nice – in fact it would be brilliant. The fact is that as a human race we love sweet food. So instead of telling people they can’t eat anything sugary for the rest of their lives, Mr Mole is trying to go down a different route. The Pertwood Farm cereals brand is working together with Alara on a granola made with yacon, so that it has “all the nice crispiness” but none of the detrimental effects of added refined sugar. And, it would be even better for you than granola made with honey or agave nectar or any other of those kinds of sweeteners – in fact it would be good for you if you wanted to use it in baking, in your tea, or in anything else you can think of.

The OF content of yacon means that it contains very few calories (1.5 kcal/g) and does not elevate blood glucose levels like refined sugars such as sucrose, therefore yacon can be consumed not only by diabetics and weight-watchers but all of us as a sweetening alternative to sugar. OF is also a prebiotic which means that it helps to reconstitute intestinal microflora and stimulates the growth and activity of friendly bacteria in the large intestine. It’s a soluble fibre which helps prevent constipation, and OF can promote calcium absorption. Furthermore, it can help reduce cholesterol levels and reduce carcinogen lesions in the colon.

All of this suggests that yacon is something we should all be eating, and in Peru they’re certainly making use of it – supermarkets offer syrup, juice, marmalade and tea leaves made with yacon. But, as with any food, being grown in one part of the world and then flown to the other side of the planet is almost never a good thing. So the fact Mr Mole is trying to grow it right here in the UK is absolutely wonderful. 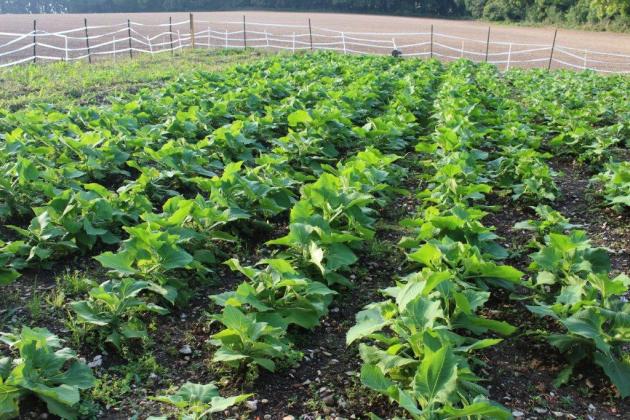 Yacon plot at the beginning of September 2014

“We were the people who applied for it to be added to the European Food Standards,” Mr Mole says, “which it is now so it’s legal.” Back at the beginning of July when I went to visit the farm, I asked him about growing something in the UK whose natural habitat is high in the Andean mountains and Mr Mole admitted that there’s not much that’s compatible here – climate wise, altitude wise, soil-type wise. “But it does seem to be fairly versatile, which is encouraging. I want to try growing it in South Africa too.” I take a few snaps on my camera and he proudly states: “this is one of the only places in Europe you can take photos of a yacon plant,” which is inspiring.

Lower Pertwood Farm bought the yacon tubers, or little bulbs, from a small nursery in Holland as well as fresh saplings from Alex Smith, co-founder of Alara Wholefoods. They were planted in pots, then transplanted to the ground, and after three weeks Mr Mole said that they’d had no casualties so far. “I’m chuffed actually,” he says, smiling behind his sunglasses. And so he should be – now, two months later, the yacon plants are thriving. This week he pulled one up to see how it was doing and the tubers are on their way to being the size of potatoes.

Discussing all the health benefits of yacon and the fact that he and Alex Smith are the first in Europe to be properly attempting to grow the plant, Mr Mole shakes his head at the western food industry. “It’s amazing to me – it just shows how under-motivated the food industry’s been to be healthy. It’s only people on the fringe like us who are saying this is a fantastic plant and we’re going to try to make it available in the mainstream eventually.”

He also reveals that yacon roots can be a delicious addition to salads. “You can simply pull it out of the ground, peel it and eat it, like a carrot,” he says. “In this fresh form it’s pure and full of goodness. There’s a huge demand from top restaurants in London actually, because they’re recognising not only its benefits but its great taste too.”

Yacon sounds like one of the most extraordinary superfoods in the world. As well as South America, it’s also starting to be grown in Russia, Taiwan, Korea and some places in the USA. But I can’t get over how great it is that Mr Mole’s having a stab at it right here in southern England, just over an hour away from where I live – it’s going to be a real, organic, local food. Yacon is something everyone should be excited about.